Asleep On My Shoulder

This alabaster sculpture is one of a series of stone carvings about contemplation and the stillness of stone.

This art sculpture comes with a Certificate of Authenticity, signed by the artist.

Nicola trained at Exeter and Wimbledon Colleges of Art gaining a BA Hons degree in Sculpture in 1990.

Whilst continuing her carving in stone, Nicola also began a collection of Bronze wildlife art sculpture pieces, initiated by a commission for a horse sculpture.  These pieces are made originally in either clay, wax or plaster depending upon the required finish of the cast piece and are about movement and the nature of each animal.

In 2010 Nicola resumed her painting, inspired by Turner’s collection in the Tate Gallery.    She is now working mainly in oils again, often using a glazing medium between the layers of paint.At the moment, Nicola is working on a number of Stone, Plaster and Wood pieces based on organic forms in Nature.  Some of her pieces involve a spiral form which she is developing further into large oil paintings.

Nicola has exhibited both abroad and widely throughout the UK, regularly in London, including at the Mall Galleries, The Royal Academy, The Menier Gallery  SE1, The Osborne Studio Gallery, Knightsbridge and Cork Street.  Her work is held in both public and numerous private collections. 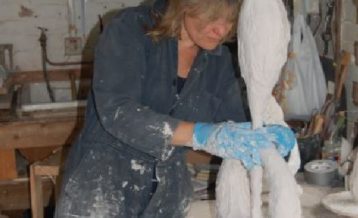 Nicola Beattie creates contemporary sculpture using traditional materials of stone and bronze, working on a series of themes.  After a year at Exeter College of Art, she spent another three years at Wimbledon Art School, London, specialising in carving large sculptures in wood and stone, graduating with a degree in Sculpture in 1990. With stone carvings of up to a metre tall, and plaster forms to be cast in bronze up to 2 metres, her current work is particularly inspired by archaeology (an ongoing series entitled Archae), castles and stone monuments native to Wales, where she grew up and has recently returned to live. Much of her earlier work was inspired by forms and aspects of nature; pods, shells and fossils, light and water - the latter two themes she also explored in a number of paintings. Nicola has exhibited both abroad and throughout the UK; London exhibitions and galleries include: The Royal Academy Summer Exhibition, The Mall Galleries, The Menier Gallery, Sotheby’s Art Gallery, and Cork Street Gallery Open competitions. Alongside exhibiting, Nicola has completed a number of contemporary art commissions for both private and corporate clients in the UK. Earlier this year, a bronze commission from further afield saw her work installed in Tai Po, Hong Kong, in the recently built ‘Ontolo’ – a new luxury residence by the sea in Tolo harbour, completed in September 2020. Her work is also held in collections in Germany, Turkey, Poland, Hungary, Greece, Singapore, the Caribbean and Australia. Last year Nicola was awarded The Sculpture Prize in the Visual Art Open Awards 2019.