This is one of a new series of small paintings called Little Gems. This one is 8″ by 8″ and is a study of a crab – a beautiful sea creature. I have used iridescent gel on the main body which enhances the colours. The sides are painted so further framing is unnecessary. The appearance of the background colour of this artwork changes in different light.

Crabs attract a mate through chemical (pheromones), visual, acoustic, or vibratory means. When fertilisation has taken place, the eggs are released onto the female’s abdomen, below the tail flap, secured with a sticky material. In this location, they are protected during embryonic development and later released into the water.

Once crabs have become juveniles, they will still have to keep moulting many more times to become adults. They are covered with a hard shell, which would otherwise prevent growth. The moult cycle is coordinated by hormones. When preparing for moult, the old shell is softened and partly eroded away, while the rudimentary beginnings of a new shell form under it. At the time of moulting, the crab takes in a lot of water to expand and crack open the old shell at a line of weakness along the back edge of the carapace. The crab must then extract all of itself – including its legs, mouthparts, eyestalks, and even the lining of the front and back of the digestive tract – from the old shell. This is a difficult process that takes many hours, and if a crab gets stuck, it will die. After freeing itself from the old shell, the crab is extremely soft and hides until its new shell has hardened.
Recent research suggests they can feel some pain! 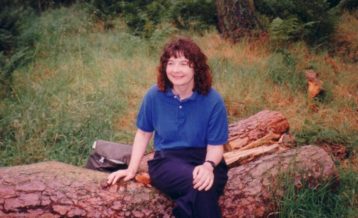 Welcome to my gallery.  " The happy highways where I went and cannot come again" (A.E.Houseman.) I hope you enjoy browsing and perhaps find a painting to your taste as well. I have sold over 3000 paintings internationally to individuals and to corporate groups, including medical and dental centres, restaurants and offices and my work has been exhibited at many galleries. I graduated from a British university and have also won awards for poetry which has been published in North America, Europe, India and Britain. I use a variety of art media including watercolour, acrylic and oil and my themes include landscapes, sea views, flowers and abstract design. Some of my recent work has a dream like quality and is born from our rich cultural heritage of myths, legends and poetry which evoke feelings of mystery and enchantment. The paintings come initialled on the front, signed and dated on the back and with a Certificate of Authenticity. They are on a frame with painted gallery edges, so are ready to hang. Thank you for looking.