The snow in the UK in 2010 made it a good year for artists but no so good for the travelling public.  This painting shows the Palace of Westminster, or the Houses of Parliament as it is also known from Westminster Bridge.  I visit London a few times every year and on this occasion was fortunate enough to capture the city in bright sunlight after about 4” of snow had fallen.

The buildings have changed dramatically over the course of nearly a thousand years of history. Transformed from a royal residence to the home of a modern democracy, the current Palace, with its iconic Big Ben clock tower, is one of the most recognised buildings in the world.  Owing its stunning Gothic architecture to the 19th-century architect Sir Charles Barry, it was built between the late 1830s and the early 1860s.  Now part of an UNESCO World Heritage Site, the Palace contains a fascinating mixture of both ancient and modern buildings.

The complexity of the façade meant that this painting ended up being a labour of love, but the end result made it well worth the effort.  I have also included Portcullis House, where Members of Parliament have their offices.  Once again, my favourite dog, Oscar, makes an appearance.  Richard used this painting for one of his own Christmas cards and it has since been selected for use as the House of Commons’ official 2013 Christmas card.

This fine art painting comes with a Certificate of Authenticity, signed by the artist.

This artwork is part of our Winter Gallery. 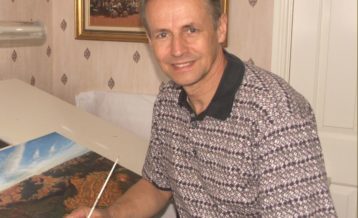