The University of Warwick have just reached their 50th anniversary, and wanted to commission a sculpture that celebrated and gave thanks to all the benefactors who have contributed over the years to their success.

The sculpture is made from a series of stainless steel rings which have 300 benefactor’s names engraved on their surface. These embody the concept of a ripple effect, and how such donations have influenced the University’s future. Those who have contributed to the University include the founding donors – who helped the university in it’s formative years, as well as more recent donors – who have  been instrumental in enabling the University to develop and grow into the site of excellence it is today.

Philip says “My aim in approaching the commission was to design a piece that commemorated the university’s benefactors whilst avoiding the static look that plaques and monoliths typically have. The sculpture needed to embody vibrance, movement and the continuous changes that have occurred and continue to occur because of the benefactors’ generosity and support – a ripple effect. Even though the sculpture is made from metal which in itself is a heavy material, I hope to capture a lightness of form that suggests a feeling of fluid opportunity. And the sculpture itself will continue to grow, as future donors’ names are added in the years to come.” 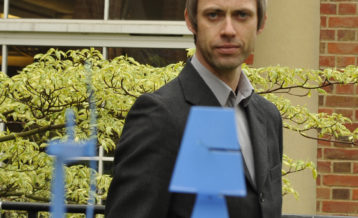 Working predominantly in metals, I create an eclectic range of sculpture and contemporary furniture. Highly aesthetic in nature, you will find much of my work curvaceous and tactile, but with a coarseness that is lent from working with bare steel. My style ranges from figurative to abstract and is always in context with its environment. In 2002 I graduated from Cambewell College of Arts in Metalwork & Silversmithing, and had experience assisting in the production and installation of major artworks across the country since 2001. Since 2003 I have been working on my own commissions and large-scale pieces, which have included artworks made from steel, stainless steel, resin and wood.   My current collection ‘Elements’ focuses on Earth, Air, Water and Fire, and describes the reaction of when those elements meet. Developing the collection I concentrated on the proccess of using repetitive form of material - curved steel flatbar, to generate concepts and capture the movement of elemental reactions. The forms are designed to work as sculptures for the home, office and garden, as well as to larger scale installations for private or public spaces.   My inspiration mostly comes from the materials I use, through experimentation and development of shape. I often work in linear forms, which are dictated by the capability of the tools I use, and what I can achieve with them. The form is of primary importance, but I also experiment with surface texture and finish - I sometimes spend weeks weathering steel with salts and water until I achieve the layers of oxidization I am looking for.