In 1985 a Peace Convoy of New Age Travellers (Hippies) on their way to a Stonehenge Free Festival in Wiltshire, was intercepted by the UK police.

Violent conflict erupted and several poliemen and travellers ended up in hospital; the conflict became known as @The Battle of the Beanfield’.

The police brutality was excessive and inflicted violence upon pregnant women. The battle herald the demise of the New Age movement. The whole shameful incident was immortalized in Prof, George McKay’s book: ‘Senseless Acts of Beauty – Cultures of Resistance’. 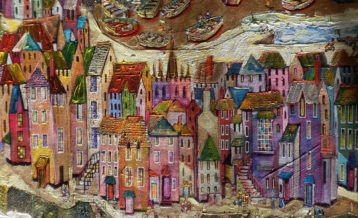 Art education at Guildford School of Art 1957 - 62 - five year course - won National Diploma in Design (with Distinction). Professional career: Won commissions from London Transport & British Transport Commission for sightseeing tours. During a forty year career in graphic design I held senior positions with advertising agencies  in the capacity as: Executive Art Director, Creative Art Director and was awarded the highest professional qualification in graphic design - FCSD ( Life Fellowship of The Chartered Society of Designers). Retired from graphic design in 2007 and subsequently took up Fine Art, selling my paintings through on-line art gallery, winning a number of sales and over 200 approvals from customers and fellow artists. I am now reaching out to a wider audience and developing new exciting ideas to produce  a series of striking paintings.