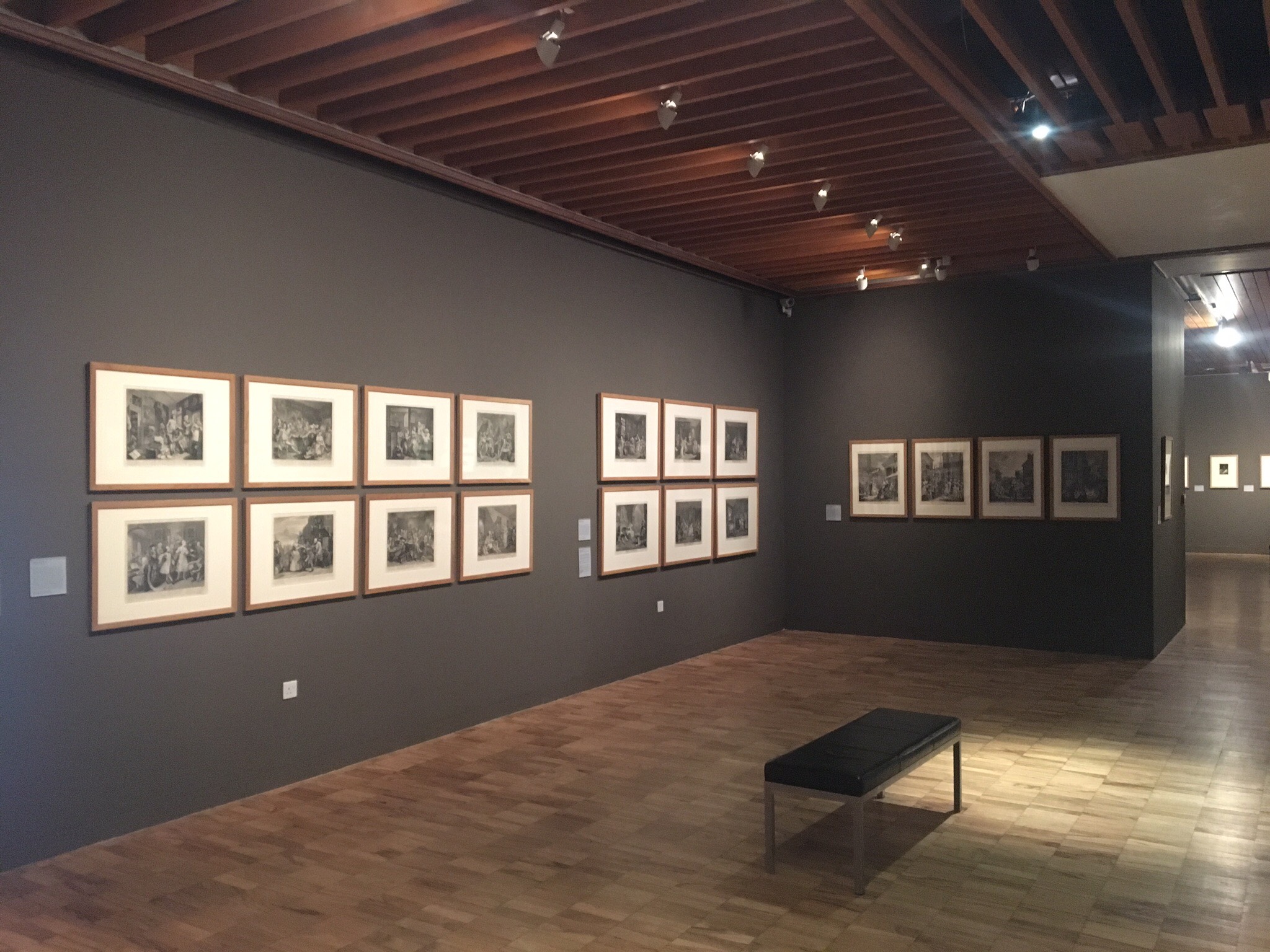 Already a huge fan of Hogarth’s work, I was thrilled to discover ‘Print of Darkness’ on a recent trip to The Whitworth Gallery in Manchester.

‘Prints of Darkness’ focuses on the work of William Hogarth and Francisco de Goya Lucientes. Both artists used their work as a form of social commentary, drawing attention to poverty, warfare, homelessness, alcoholism, corruption, disease and racism.

Hogarth was initially apprenticed as a silver engraver, having grown up in poverty. He was a talented artist and businessman and soon turned his attentions to printmaking as a way of expressing himself, showcasing his work to a wide audience and making money.

Goya was influenced by Hogarth, having seen his prints at his patron Sebastian Martinez’s home whilst recuperating from illness in 1793. At this time Spain was dominated by the interests of the Catholic Church and Monarchy and liberals like Goya fought for reform. His prints reflect his feelings, and he continued to produce them late into his life despite being plagued by mental and physical illness. 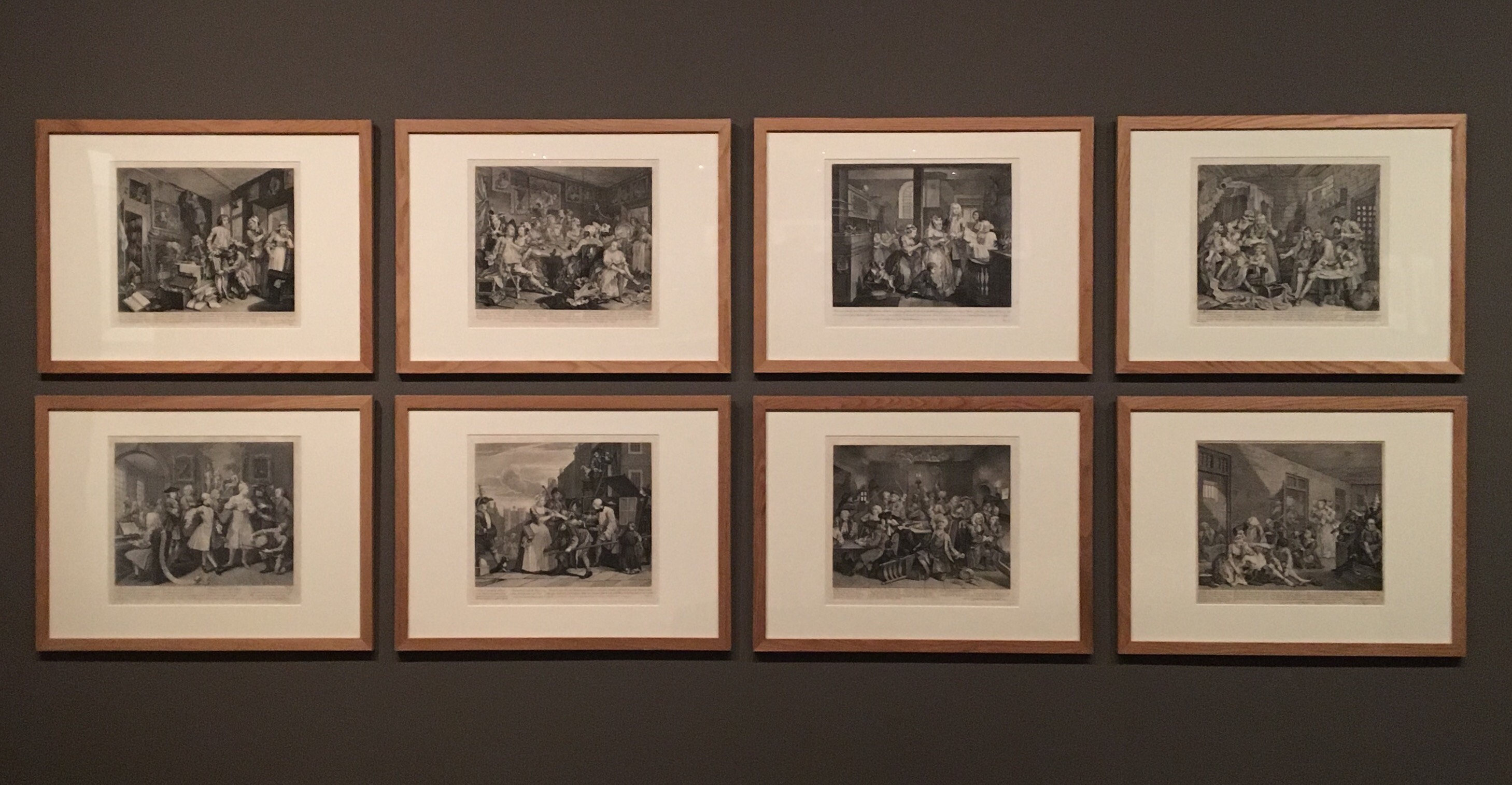 ‘The Rake’s Progress’ 1735. Hogarth pioneered the serial print format and called his series ‘progresses’ to reflect the movement of the central characters through their lives in a physical, social and moral sense. This series charts the life of Tom Rakewell. He inherits his father’s fortune but succumbs to materialism and is consumed by gambling and alcoholism, eventually ending up in a psychiatric hospital. 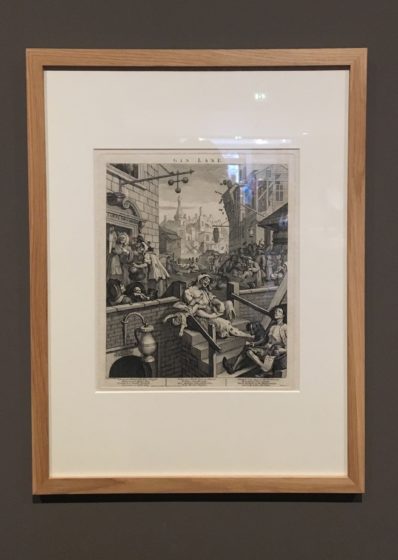 ‘Gin Lane’ 1751. Alcoholism was a huge social problem in the eighteenth century and in this print Hogarth has created a nightmarish scene full of gin-crazed people. The print shows crime, corpses and diseased people willing to put gin before anything else – the lady in the foreground is willing to let her baby fall to the ground. Infant mortality was another result of the huge consumption of gin. 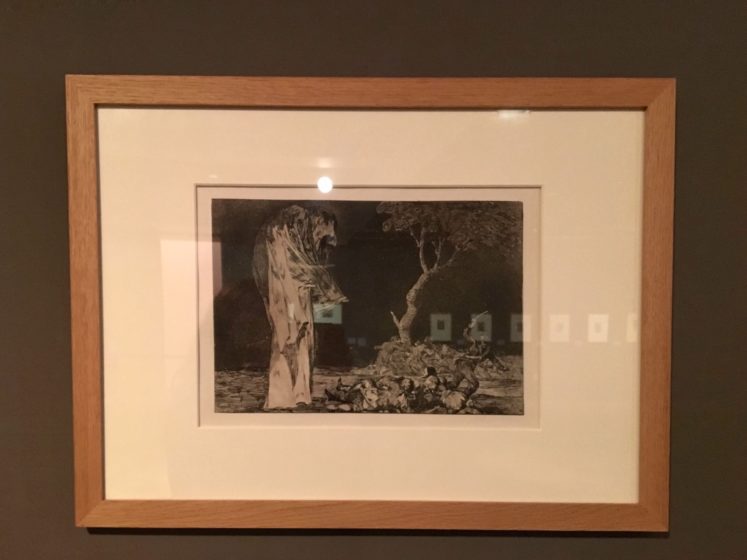 As Goya grew older his subject matter became darker. This print is from ‘Los Disparates’, Goya’s final print series made between 1815 and 1823. The series is difficult to interpret, involving dark, grotesque figures in bleak, unrecognisable landscapes; perhaps reflecting the deterioration of  Goya’s own state of mind. 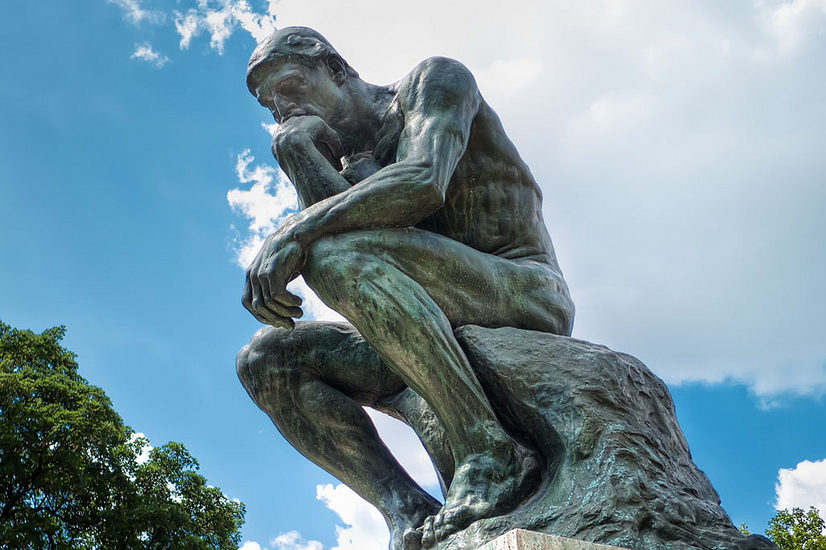 One of art’s greatest gifts is its subjectivity. Art can be appreciated purely for its aesthetic beauty but it has the power to make the viewer stop and think. Sometimes the viewer can be encouraged to think about politics, history, or the nature of life itself. With this in mind, we have collected 4 artworks which demonstrate the power of art to make you think.. 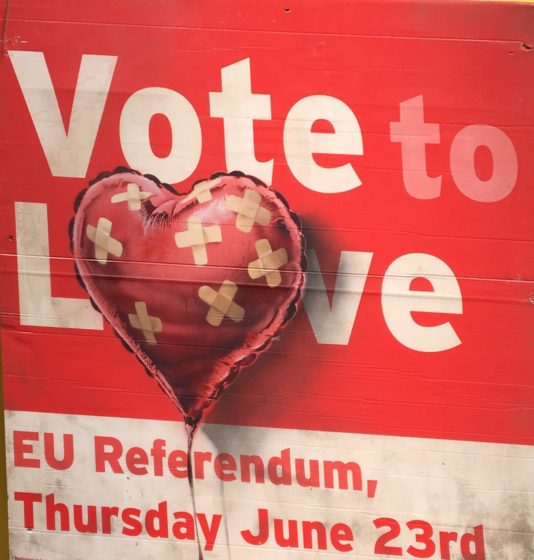 The UK is familiar with the ‘Vote to Leave’ poster which circulated in 2016, and, at first glance, it seems that this is just an altered placard, asking us to view this statement from another angle. But there’s more.. The balloon is a reference to Banksy’s earlier artwork ‘Girl with Balloon’. The heart-shaped balloon is a symbol of hope which has recurred throughout the artist’s career.

The viewer is being asked to think about the implications of Brexit. Just as soon as we are made to believe that this is the full message, Banksy has provided a further twist. The artwork, exhibited at the 2018 Royal Academy Summer Exhibition, was up for sale for £350,000,000. If the artwork had sold for this much it would have been the second most expensive artwork ever sold. That number, however, seems familiar.. It’s the number that Boris Johnson’s ‘Vote Leave’ Brexit bus claimed would be saved every week by leaving the EU. Banksy has created art which has made us think about our political choices.. 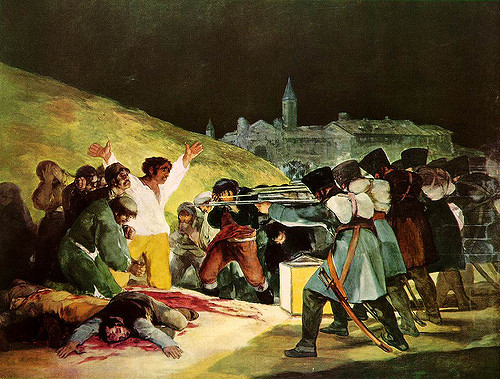 This painting forces the viewer to recognise the true horrors of conflict. It brings to light the events which occurred in 1808 and asks us to think about the brutality of war. The scene depicts part of the Peninsular War during which Napoleon wanted to take control of Spain. We are faced with the stark reality of a firing squad facing a line of victims. Following a rebellion by the Spaniards against their new King, Napoleon’s brother, Joseph Bonaparte, the French wanted revenge and large numbers of Spanish civilians were shot in Madrid on the morning of May the third 1808.

The painting was considered revolutionary. The subject matter was not a Christian scene and neither was the depiction of war a heroic one in the high style of history painting. We are instead faced with a brutal scene of murder and anguish as a line of condemned men stand next to the bodies of those already killed.

The painting is tied to traditions of martyrdom in Christian art. There is the dramatic use of chiaroscuro and the central figure has been compared to Christ during crucifixion. His arms are outstretched and he also has stigmata-like marks on his right hand.

3. ‘The Empire of Light’ Rene Magritte

A series of paintings by Magritte painted between 1949 and 1954. 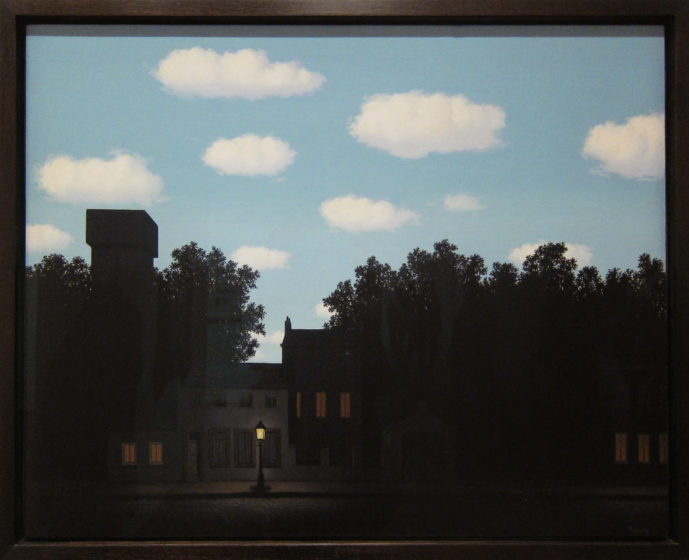 Common to all of them is a street painted in darkness, lit by a single street lamp, and yet with a bright blue sky above. The paintings are paradoxical. How can the street be in darkness while it is actually daylight above? Magritte was a Surrealist artist and these paintings display one striking element of fantasy. It simply cannot be daytime and night-time at the same time. We are made to think about this juxtaposition and ask why it has been presented to us. Perhaps it is a moral question in which the light of day represents good and the darkness of night evil? Can the two co-exist in reality? There is also the possibility of the conflict between the two sources of light. Natural light from the sky versus the artificial light from the streetlamp. Nature versus man.

The painting is wholly without human emotion. It can be seen as being without soul or feeling. The deserted street is in darkness despite the apparent sunlight above. There is the sense of unease and impending (  )

This suggestion is amplified by the painting’s later use as inspiration for the movie poster for ‘The Exorcist’. The priest is shown outside the house from which is emitted an unnerving evil light whereas he, the outsider, is lit only by streetlight. 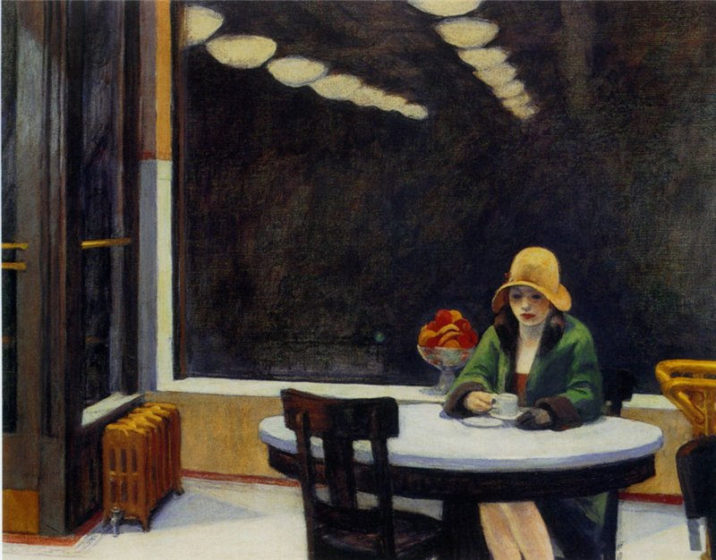 This painting asks the viewer to think about the nature of loneliness and the story behind the young woman’s late-night coffee. The image is striking because she sits alone in a brightly lit cafe at night time. We are left wondering whether she is waiting for someone or choosing to dine alone. Is this a comment on urban loneliness? You can almost feel a slight sense of threat from the unseen city outside even though there is no sign of life. She has removed only one glove which is an intriguing detail and suggests that the cafe is cold inside and adds to the bleakness of the setting. The introspective look on the woman’s face leads us to wonder whether she is searching for something or someone or perhaps waiting. We imagine stories for her that involve love, loss or being away from home.

This theme is common to many of Edward Hopper’s paintings. The idea of being far from home is  suggested again and again by lone figures who appear to be waiting in public places, or who are travelling on trains. Do we project our ideas of loneliness onto these figures because we recognise  something in their facial expressions? Perhaps it helps us to do so. It can be argued that when we notice traits of unhappiness in other people it helps alleviate similar feelings that we might have. It shows us that we are not alone.